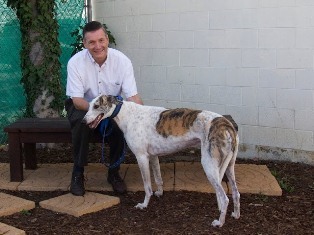 When we received this account of Hemopet volunteer life, we were so overwhelmed with gratitude and thankful to Ernie (Right with Houdini) who dedicated his time to recount his experiences. Ernie and Vicki have volunteered at Hemopet for the past eight years. Without their help and the help of our other volunteers, we would not have been able to achieve what we have. If you are unable to volunteer, we ask that you please make a donation, please visit our Hemopet donation page.

My wife Vicki and I started volunteering as Greyhound Spoilers at Hemopet more than 8 years ago.

We learned about Hemopet because Dr. Dodds spoke to our dog club about the dangers of overvaccination, which was not well known at the time, and invited club members to come volunteer.

For over two years we volunteered at the Irvine center. In those days we walked lots of dogs every Saturday morning, up and down a business park street. It was our introduction to these amazingly affectionate and docile companions. One thing I especially recall is that the location was in the final flight path to the airport and sometimes when the big jetliners would roar in low it would send a gush of turbulence through the trees, bringing down showers of leaves and startling the dogs and walkers.

We switched to the business park center near Goldenwest and as anyone who walked Greys there knows it was not an ideal walking situation. But some of our best experiences happened there.

I especially remember spending months and months walking Curious George (below, left) and Briana (left), who was on a 6-month quarantine before she could join some other adopted Greys in Hawaii. Once you earned their trust they can be so excited to see you, and so affectionate and loving. George was such a quirky character, but I could read him like a book. Vinaigrette (below, center) was so regal, like a royal hound. The enthusiastic Kitty (below, right) who just LOVED her walks.

For a long time everyone was excited about moving to the new Hemopet center in Garden Grove, and once we got into the current Garden Grove site it was such a huge improvement for all. Anyone who volunteered at the previous locations can attest to what a great location we have now.

At the new site I especially remember Cuidado. He had set records on the track, and was super savvy. I knew that from the first day because he pulled me over to the vending machines and looked at the machines then looked at me and then looked back. Clearly he had been getting handouts from someone with coins at some point in his racing days.

Season (right) was one of the biggest, most muscular Greys I ever spent time with, but he warmed up and would often want to put his paws on your shoulders (which of course we discouraged). He just had such love. I walked Houdini for many months, and was so happy for him to go home, but still miss him.

The most important thing I can say as a Hemopet volunteer is that over more than 8 years I have never had two dogs that were the same, they are all such individuals. And yet they are all so mellow, with huge hearts. 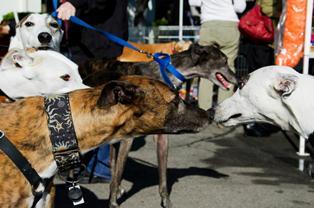 My wife and I also have done terrier rescue for more than 17 years now. During that time when we have picked up dogs at shelters or rescues, the conditions are not always great. But in all our years at Hemopet all we have ever seen is pure love and care for the animals. The Hemopet staff loves these dogs, just as if they are their own.

We still have our Hemopet shirts from the Irvine days. Wish we could buy new shirts someday.